By Regd editorial
November 11, 2022
Recent release "Odyssey Down Under: Parts II and III" from Newman Springs Publishing author James Gardner follows Captain Dick Mobley as he continues his expedition through the South Pacific, encountering the various locations of the South Pacific Island, New Zealand, and more. Each new location presents a fresh adventure that leaps off the pages and comes to life through Gardner's writing. 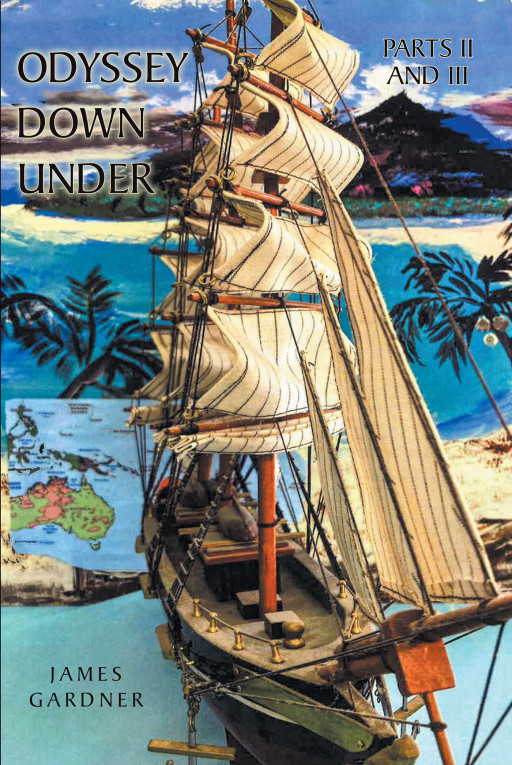 James Gardner, who traveled extensively with his late wife Anita while serving in the U.S. Navy, has completed his new book "Odyssey Down Under: Parts II and III": a stirring collection of escapades that follows the travels of Captain Dick Mobley as he explores the South Pacific.

"The story, which began in 'Odyssey Down Under', continues with Parts II & III taking readers along for another trip with Captain Mobley and his crew on The Endeavor to South Pacific Islands, Norfolk, New Zealand, and Tasmania," writes Gardner.

"So come 'down under' while we sail to some of these islands and grasp their beauty, romance, and intrigue as we continue our journey. I will write some logs and facts about this trip and fantasize how they were and how in reality they are today. For example, in World War II, my brother, Tim, said that Hawaii's chain of islands were still tropical islands. Honolulu was rightly populated, one hotel and Pearl Harbor base. Now it's wall-to-wall—or should I say shore-to-shore—with more hotels and stops, this happening to most islands as soon as an airstrip was put in!

"But still, in spite of modernization, the islands hold that ancient mystique and their primitive beauty in their nature. Geography is a call from the islands, 'Here am I, come to me!' So come aboard with me for a trip of a lifetime on this 'Odyssey Down Under: South Pacific Islands, Norfolk, New Zealand, and Tasmania'."

Readers who wish to experience this riveting work can purchase "Odyssey Down Under: Parts II and III" at bookstores everywhere, or online at the Apple iBooks Store, Amazon, or Barnes & Noble.

Share
Facebook
Twitter
Pinterest
VK
WhatsApp
Previous article
Author Rose Jones’ new Audiobook ‘Earth Story’ follows the quest of Tessa, who must rely on her strength and powerful will to overcome great odds and rescue her father
Next article
Author Francis W. Vanderwall’s new book ’32 Healing Meditations for a Wounded World’ is a guide to help readers uncover ways to heal and improve their lives
- Advertisement -

In the wake of failed GOP efforts to take back the Senate, including in battleground states like Pennsylvania, conservatives need a new principled, optimistic vision for how they will address the problems of our time. Given most Americans believe the country is headed in the wrong direction, America needs a path out of its current downward spiral of stagnation, disillusionment and decline. And in the face of China's campaign for global supremacy, the nation needs leaders who will fight to preserve America's superpower status.

In Superpower in Peril: A Battle Plan to Renew America (Center Street, March 14, 2023), David McCormick - former CEO of Bridgewater Associates, U.S. Army paratrooper and candidate for the U.S. Senate - outlines a conservative agenda for American renewal that fuses the populist impulse with common-sense reforms that would expand access to the American dream, enable U.S. technological supremacy, and confront China.

Drawing on management and leadership lessons honed in uniform, in the boardroom and at the highest levels of government, McCormick issues a call for servant leadership that is as relevant for entrepreneurs and those in business as for politicians and policymakers. Recognizing the talent and untapped potential in the American people, he argues that if we commit ourselves to renewal and reviving the restless American spirit of hard work and self-confidence, America will see a new birth of dynamism, strength, and exceptionalism. In Superpower in Peril, McCormick details:

PRAISE FOR SUPERPOWER IN PERIL

"In Superpower in Peril, David McCormick answers the most important question of our time: How do we save America from the forces that want to tear it apart? This book is a must-read for all who care about the fight for our republic." - Mark Levin, Radio and Television Host

"Superpower in Peril is a manifesto for national renewal, a powerful riposte to those who claim America's best days are behind it. Immigration reform, a National Innovation Council, a bonfire of the Biden administration's regulations, reform of Big Tech, not to mention Big Defense." - Niall Ferguson, Senior Fellow at the Hoover Institution and Author of Doom: The Politics of Catastrophe

"Superpower in Peril is a timely and provocative guide for what our country must do next, full of lessons from David McCormick's time as a CEO, military officer, and statesman. - Marillyn Hewson, Former Chairman, President, and Chief Executive Officer of Lockheed Martin Corporation

"Superpower in Peril is a book to be read and discussed, but it is also a book to be implemented. It is up to us to ensure that David McCormick's recommendations carry on beyond its pages, drive real change, and restore confidence in our ability to build a better future for generations of Americans to come." - H.R. McMaster, Senior Fellow at the Hoover Institution and Author of Battlegrounds: The Fight to Defend the Free World

ABOUT THE AUTHOR: David H. McCormick is a proven business executive, combat veteran, and public servant. He served as the Chief Executive Officer of Bridgewater Associates, one of the world's largest investment management firms, before pursuing a U.S. Senate seat in his home state of Pennsylvania in 2022. Prior to Bridgewater, he was the U.S. Treasury Under Secretary for International Affairs and held senior posts on the National Security Council and at the Department of Commerce. From 1999-2005, David was the CEO and then President of two publicly traded software companies. He is a graduate of the United States Military Academy, a former Army officer, and a veteran of the First Gulf War. David holds a Ph.D. from Princeton's School of Public and International Affairs, and previously served on the Defense Policy Board.

For more information or to schedule an interview with David McCormick, please contact Bridget Lewis at [email protected] or 702-773-2111