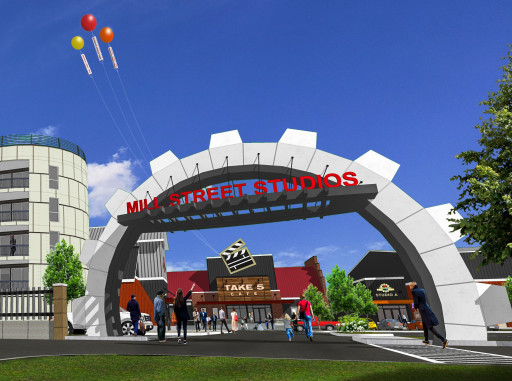 As the waitlist continues to grow with sign-ups from film producers and distributors, Mill Street Studios (MSS), the long-awaited dream of Monte and Charlotte Reeves, comes closer to fruition.

Hard to believe this former cottonseed oil mill the Reeves purchased once employed hundreds of workers less than a mile from Mississippi's State Capitol. Like Memphis, TN, and Tulsa, OK, downtown Jackson was once a thriving, upwardly mobile epicenter of Black entrepreneurship and industry at the turn of the 20th century. The Reeves believe those days are about to return.

Less than two miles from the MSS campus, the Mill Street Movie Ranch is being designed on 20 acres of raw land in a federally designated Opportunity Zone for exterior production locations.

"So when the stars and studio executives fly into town on their private jets, they'll be landing at Hawkins Field, a city-owned cargo and private jet airport less than three miles away," according to Monte Reeves, co-chair of Mill Street Studios LLC.

His co-chair and wife, Charlotte Reeves, reports, "The response from real estate developers and investors to our RFPs has been gratifying. They all recognize the profit potential of this dramatic urban renaissance."

As part of the current design and engineering phase of the project, MSS is being developed as environmentally friendly. Its 216 average annual days of sunshine guarantee solar power as an energy source, supplemented by the electric grid. It's located on an elevated plain which provides a natural barrier to flooding; and it's above an underground aquifer well to provide pure, sweet water to recycle for the many fountains and waterfalls planned for the property.

The studio expects to hire a full-time staff of over 250, providing job growth and an economic boost for the state capital and surrounding region.

The MSS waitlist was launched Oct. 1, 2022. First to sign up was Oscar-winning producer Gerald Molen (Schindler's List, Jurassic Park and dozens more features). Molen is currently preparing the southern romantic thriller Sweet By and By for Los Angeles-based Movicorp Media. "Movicorp CEO Robert Schnitzer brought this new studio to my attention, and it may be perfect timing for our miniseries," said Molen.

Indeed, Schnitzer is on the board of Mill Street Studios LLC and is no stranger to Mississippi. "I directed The Premonition, my second feature, in Jackson and fell in love with the place." The award-winning film, currently available on Amazon Prime, Tubi and other streaming platforms, showcases many of the Magnolia State's unique locations.

Those on the waitlist will be the first to receive the MSS Rate Card when published next year, as well as charter discounts and promotions. "We don't know the exact fees at this point, but they will be far less than those in Los Angeles and New York. In fact, Mississippi's cost of living is the lowest in the nation; its hospitality is legendary; and there are virtually no traffic jams on our highways," added Ms. Reeves. "Time is money in movie production."

According to Nina Parikh, director of the Mississippi Film Office, "The addition of a production facility with multiple stages in central Mississippi would increase our ability to draw larger productions which have often located in surrounding states with established studios. Our cash rebate has been an exceptional recruitment tool, but infrastructure to support the industry is essential for continued growth. Mill Street Studios has the potential to meet this critical demand."

The Reeves expect to open the studio gates for business in Q4 of 2023. Visit MillStreetStudios.com. 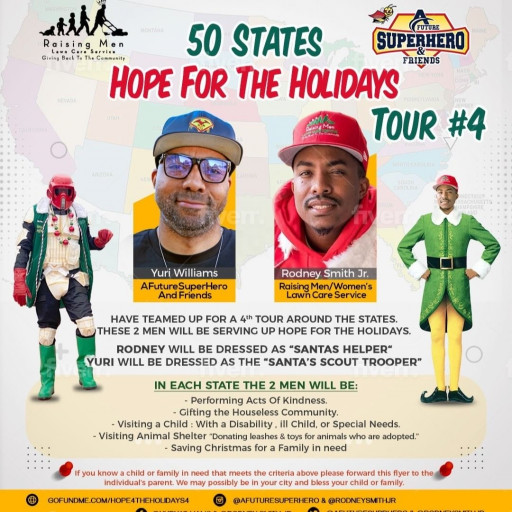 AFutureSuperHero And Friends and Rodney Smith, Jr. Partner for 'Hope 4 The Holidays' USA Tour, a nationwide tour in which one person or family in each state will be chosen to receive donations, special visits, and more. Yuri Williams, founder of AFutureSuperHero And Friends, has become well-known for his efforts in helping those in need. He dons a superhero costume and goes to hospitals, homes, and special events, where he also gives back. Often, he partners with others who have the same mindset. Rodney Smith, Jr., is the creator of Raising Men Lawn Care Service and the "50-yard challenge", in which he encourages kids and teens to mow lawns for charity.

Now, the two are partnering for their 4th annual "Hope 4 The Holidays" tour. They will be traveling across the United States and blessing one family or individual from each state around the nation.

The non-profit is looking for nominations from people across the country who know someone they'd like to see blessed in such a way. These nominations can be made by simply messaging AFutureSuperHero And Friends via social media or e-mail.

This year, as more and more people are struggling to make ends meet, Williams and Smith are committed to making the holidays brighter for those in need. Both of these men have become well-known for their passion for giving back, and as part of this, they are also giving others the opportunity to give back.

Anyone wishing to donate to this cause can do so at the ASuperHero And Friends website www.AFutureSuperHero.org.

On Nov. 25, 2022, the two will embark on the 4th annual "Hope 4 The Holidays" tour. Their travels will begin in Louisville, Kentucky. Further details can be found at https://afuturesuperhero.com/.

AFutureSuperHero And Friends is a non-profit organization that gives back to the houseless, veterans, ill children, elderly, and animals.

Author Dr. Ruth Hayes’ New Book ‘If I Can, You Can’ is Based on a True Story About Dr. Hayes’ Life as She Was...

Author Joshua Stevens’s New Book ‘Dark Legends: Rise of Darkness’ Explores a Vast Republic Far From Earth That Sits on the Cusp of a...