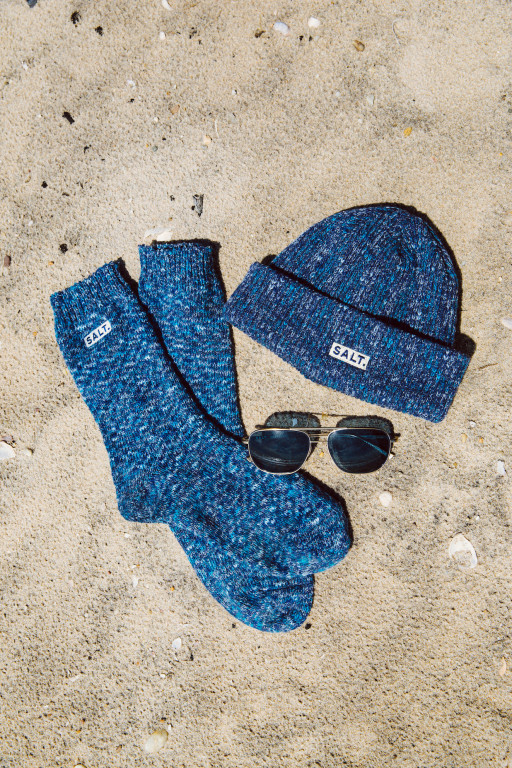 Inspired by effortless beauty, sustainability, and quality, the collaboration between the two brands redesigns the Druthers staple yarn style with a unique and subtle twist. The collection is limited to 500 sets and arrives in a custom Druthers NYC x SALT. Optics branded FSC® recycled box. The collection is available only at the SALT. Optics store located at The Shops at Sportsmen's Lodge at 4220 Coldwater Canyon Ave., Suite #104, Studio City, CA 91604 and online at druthersnyc.com.

Headquartered in Costa Mesa, California, SALT. Optics was founded in 2006 by David Rose, Taylor Whisenand and Ron Smith. Influenced by the California coast, the premium eyewear brand draws inspiration from the sea, air, land and timeline connection of these natural elements. Each pair of lenses is crafted in Japan using high-quality materials, from premium acetate to Japanese aerospace-grade titanium. SALT. Optics is available to shop online at saltoptics.com and in-store.

Launched in 2014 by Adam Gianotti, Druthers NYC is a fashion label leading in sustainability. Offering a range of responsibly made garments and accessories, Druthers NYC creates timeless designs while pushing the supply chain toward environmental sustainability. Druthers is committed to helping the planet outside the scope of manufacturing and consumption practices by supporting sustainable facilities and groups who support recycling and global clean-up efforts. Shop Druthers NYC at druthersnyc.com.

Share
Facebook
Twitter
Pinterest
VK
WhatsApp
Previous article
Author Christina Schwabauer’s New Book ‘The True Meaning of Christmas’ is a Faith-Based Read to Help Young Readers Discover the Reason Why One Celebrates Christmas
Next article
Landon Parker’s New Book ‘Militia Justice: The Fall of a Wrestling Legend’ Follows the Author as He Investigates a Crime for Which His Father Was Accused Of
- Advertisement -

Jesse White will give away 500 coats and 200 socks, donated by Ann Jhin, to the local community. Afterward, a 'Thank You' celebration will be held to honor Jesse White and his accomplishments. 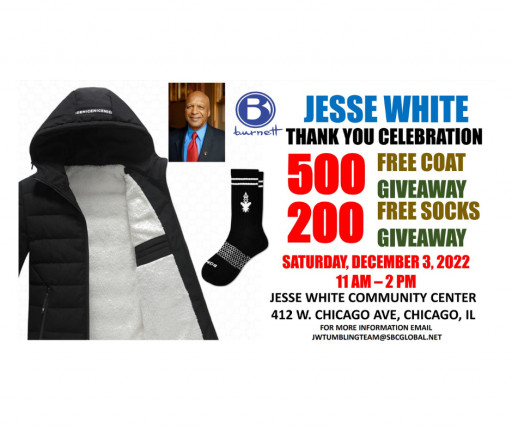 Jesse White \u2014 Thank You Celebration
Jesse White, in partnership with Ann Jhin, will give away 500 coats and 200 socks to the local Chicago community.

On Saturday, Dec. 3, 2022,  Illinois Secretary of State Jesse White will host his final public appearance with a coat and sock giveaway to those in need at the Jesse White Community Center at 11 a.m. Chicago-based entrepreneur Ann Jhin, CEO of Jinny Beauty Supply, the largest multicultural and ethnic beauty supply distributor in the world, graciously purchased and donated all 500 coats and 200 Bombas socks for this giveaway to the local community. Following the giveaway, there will be a performance by the internationally renowned Jesse White Tumblers, who have been helping impact the lives of thousands of young Illinoisans for more than 60 years. As a "thank you" to Secretary of State Jesse White, who has served for nearly a quarter-century, Eli's Cheesecake will present a celebratory cake in honor of Jesse White's accomplishments throughout his career in Illinois and beyond.

This "Thank You Celebration" will mark Jesse White's final appearance before he departs the political stage. All are welcome to join and celebrate his work with Illinois, the community, and all those that have been impacted by his honorable career. Jesse White is Illinois' 37th Secretary of State. White was first elected to the office in 1998 and won landslide victories in 2002, in which he won all 102 counties, and again in 2006 and 2010. On Nov. 4, 2014, White was re-elected to a record-breaking fifth term, winning another landslide victory by a 2-to-1 margin in which he earned over 2.3 million votes statewide — more than 230,000 votes than any other statewide constitutional candidate. White became Illinois' longest-serving Secretary of State on May 30, 2014.

Before his election as Secretary of State, he played professional baseball with the Chicago Cubs organization, which was followed by a 33-year career with the Chicago public school system as a teacher and administrator. Jesse White also served as Cook County Recorder of Deeds, served 16 years in the Illinois General Assembly and served our country as a paratrooper in the U.S. Army's 101st Airborne Division and as a member of the Illinois National Guard and Reserve.

All are welcome to celebrate Jesse White's "Thank You" Celebration.

Original Source: In Final Public Appearance, Illinois Secretary of State Jesse White Spreads the Warmth With Coat and Sock Giveaway for Those in Need