Expedition Launching to Study the Colossal Squid in Antarctica

By Regd editorial
October 19, 2022
An international expedition is heading to Antarctica this December in an attempt to find and film the world's largest invertebrate in the deep sea for the first time. 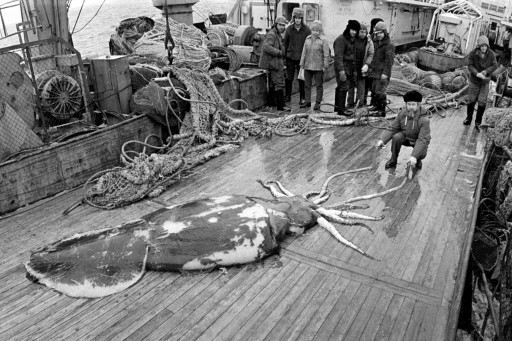 Copyright: Remeslo, A. 1981.
The first whole specimen of a colossal squid was caught in a scientific trawl in 1981.

A collaborative effort spearheaded by ocean non-profit KOLOSSAL is underway between a polar tourism vessel, underwater technologists, and marine biologists, to repeatedly deploy deep sea cameras into the Southern Ocean to try and uncover the biological mysteries of the colossal squid. The goal is to find and study the colossal squid before 2025, the hundred-year anniversary of the first discovery of the species. The groups have launched a crowdfunding campaign to support the expedition until Nov. 17 with the Experiment Foundation, and so far have reached 75% of their nearly $15,000 stretch goal.

The colossal squid is the largest invertebrate in the world, and one of the largest ocean predators. It has the largest eye in the animal kingdom, about the size of a dinner plate. It could weigh as much as 750 kg (1,650 lb.) or more, and the total length is ~10-12 meters (~30-40 ft.). It is believed to live primarily in the deep sea in the Southern Ocean around Antarctica. Only a few whole specimens have been found, and it's never been observed in its natural habitat, the deep sea.

"The colossal squid is an oversized poster species for how little we know about the ocean," said Matt Mulrennan, Marine Scientist, an organizer of the expedition and Founder, CEO of ocean exploration nonprofit KOLOSSAL. "It's the largest invertebrate on our planet, with the world's biggest eye, hooked tentacles, and likely glows in the dark, does it get any cooler than that?"

The team is surveying locations in the Antarctic Peninsula onboard the tourism vessel Ocean Endeavour operated by Intrepid Travel to observe the colossal squid's behavior, and raise awareness about conservation priorities for the Southern Ocean. Some basic questions the expedition could answer about the colossal squid: How large do they grow? What is their most preferred habitat? Do adult females spawn near the surface? How does it use its massive eye (offense or defense)? Is it attracted to lighted displays? How does it use bioluminescence?

"We're thrilled that our technology will be used to attract and possibly capture footage of the elusive colossal squid, especially as we approach the 100-year anniversary of the first discovery of this species,' said Chad Collett, Founder, CEO, at SubC Imaging.

An ocean exploration and conservation non-profit based in Venice, CA.

The largest small group adventure company in the world.

Canada's most comprehensive center for education, training, applied research and industrial support for the ocean industries.

A specialist travel operator with over 20 years of experience in Antarctica, the Arctic, and Latin & South America.

Author F.P. Gonzalez’s New Book ‘Revelation of the King: Third Archive of the Magi’ is the Thrilling Conclusion of the Author’s Historical Fiction Series

Jessica Culver’s New Book ‘My Mind Works at Midnight’ is an Engaging and Thought-Provoking Series of Writings From the Author’s Mind Aimed at Sparking...

Author Michael Malecki’s New Book ‘The Fuller Jewel’ is a Powerful Fantasy Tale of a Young Girl Who Must Solve the Mystery of a...