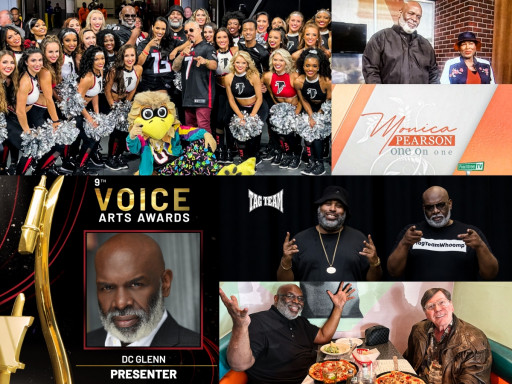 Bass music legends Tag Team energized a sold-out Mercedes-Benz Stadium at last Sunday's Atlanta Falcons game against the Pittsburgh Steelers. The Atlanta hip-hop duo performed their nostalgic anthem "Whoomp! (There It Is)" during the Falcons' "90s Day" halftime entertainment performance. They were joined by pop music veterans C+C Music Factory for a 90s-themed hip-hop concert that created a flurry of social media buzz that garnered instant virality. Tag Team continues its legendary march through the annals of recorded music and the entertainment industry with a multitude of live performances on stage and on screen for millions of popular music partygoers worldwide. In 2023, the old-school hip-hop Atlanta rappers will celebrate the 30-year anniversary of their signature hit record.

While Tag Team continues to thrill audiences with their energetic concert events (I Love The 90's tour) and television performances (The Masked Singer), member DC Glenn has also been making waves with his entrepreneurial endeavors. DC continues to rack up accomplishments that solidify his position as a rising star in the worlds of business, entertainment media, and finance.

Interview: Monica Pearson One on One
Tag Team music industry veteran DC "The Brain Supreme" Glenn remains busier than ever as a sought-after TV and film actor, voice artist, digital marketing (SEO) consultant, and featured podcast entertainment guest expert. Glenn recently made an appearance on Peachtree TV's "Monica Pearson One on One." The friendly interview was reminiscent of two old friends catching up, with Glenn telling stories from the past and sharing new details about his future entrepreneurial plans. The celebrated talk show culminated with a hilarious rendition of the now-famous, award-winning GEICO commercial, "Scoop! There It Is," as viewers watched Glenn and Pearson dancing, scooping ice cream, and throwing sprinkles throughout the broadcast set of Atlanta's CBS 46.

New AI Writing Generator: GOCharlie.ai
Glenn's ventures include a foray into angel investing through an association with GoCharlie.ai. "A Content Marketer's New Best Friend." GoCharlie is a revolutionary writing software that employs Artificial Intelligence (AI) to assist entrepreneurs, copywriters, and businesses create customized content for blogs, websites, social media, and the endless universe of demanding daily writing responsibilities. Glenn has discovered GoCharlie to be the highly productive and efficient answer to a lifelong pain point (writing) and confirms GoCharlie.ai has changed the paradigm of his business and increased his bottom line as a Search Engine Optimization (SEO) professional tenfold.

Corporate Speaker: Book Publisher
Glenn is poised to enter the lucrative corporate speaking circuit with a tireless and enthusiastic fervor, having connected with legendary corporate speaker bureau master Bruce Merrin of BruceMerrinsCelebritySpeakers.com. Glenn's upcoming speaking engagements will be accompanied by the publication of his first book. Scheduled to be published in 2023, the motivational book will impart pragmatic solutions gleaned from Glenn's tenacious "hustle" during his career and serve as motivation for those who require "a pocketful of gumption" to pursue the entrepreneurial goals they've always imagined. Also in 2023, Glenn will unveil a series of new educational websites: www.ThisIsWhatIDo.net and www.PutYouOnGame.com. Combined, these new innovative instruments of learning will enable Glenn to share the lessons and knowledge bestowed upon him by his venerated elders, mentors, and compatriots, validating that any one of us can cultivate a life well lived.

2022 Voice Arts Awards: Voice Artist Presenter
For the second successive year, Glenn is lending his talents as a presenter at the 9th Annual Voice Arts Awards on Dec. 18 in Burbank, CA. The prestigious Society of Voice Arts and Sciences (SOVAS) hosts this annual occasion honoring the remarkable expertise and inventiveness involved in voiceover artistry on an international scale. This annual event is adeptly crafted to honor the community of entertainment professionals who compose, direct, produce, cast, engineer, and distribute media works, prominently highlighting the vocal mastery of voiceover works worldwide.

With so much activity,  Tag Team is quickly booking appearances for 2023, which marks the 30-year anniversary of the release of "Whoomp! (There It Is!)" as a worldwide hit.

Please direct all acting and voiceover inquiries for DC Glenn via
EMAIL: [email protected] or via
PHONE: (404) 874-6448 The People Store Agency in Atlanta, GA.

Monica Pearson One on One
https://www.peachtreetv.com/monica-pearson